Findings from the Active Lives Survey

The Active Lives Survey provides an insight into how people are getting active.  Results are published twice a year and the information below is from the November 19-20 report.

The impact from the coronavirus pandemic has seen a decrease in activity levels compared to the previous year with women, young people aged 16-24, over 75s, disabled people and people with long-term health conditions, and those from Black, Asian, and other minority ethnic backgrounds most negatively impacted.

On a National level those who were active fell by 2.6% to 61%. Activity levels in the Humber remain below the National average and decrease by 4.9% to 56%. The percentage of inactive (those active for less than 30 minutes a week) adults increased Nationally by 2.6% to 27% and in the Humber by 2.7% to 31%

With restrictions impacting on the types of activities available, many adults were able to find alternative ways to be active. 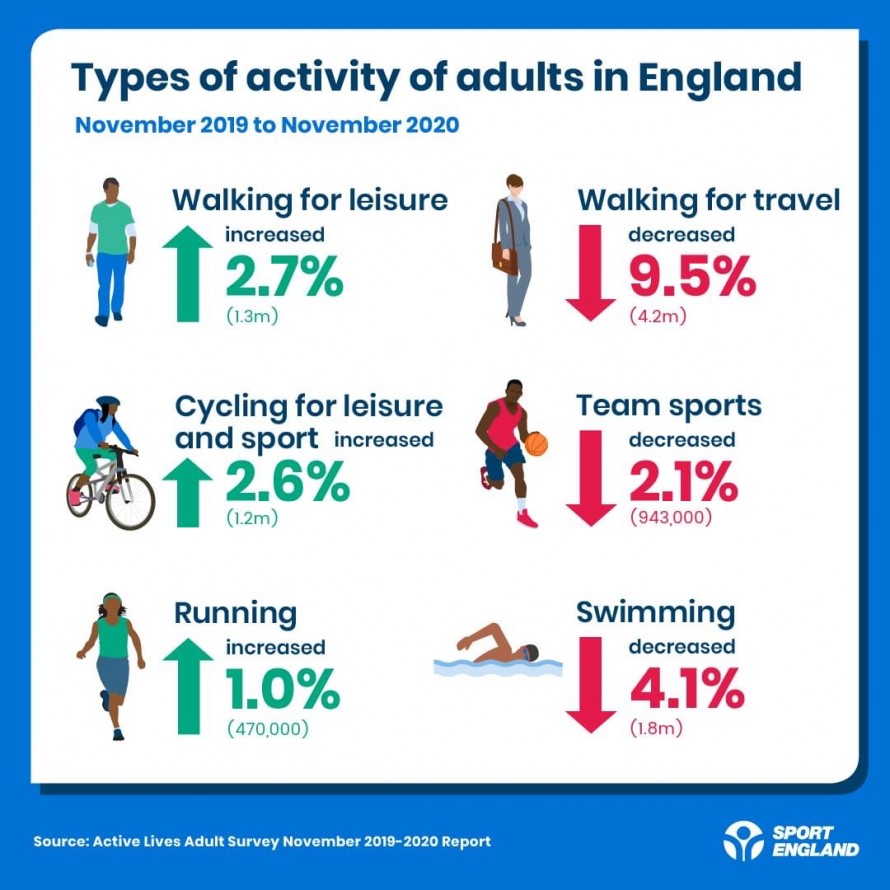 In our previous analysis of the Active Lives Survey, Active Humber identified three priority groups where inequalities are highest, below highlights the findings from the survey for these specific groups,

55 to 74-year-old people: In previous years, participation in this age group had been growing strongly. For ALS 19-20. there was a notable reduction in activity levels when restrictions were introduced. Activity levels began to recover mid-September to mid-November suggesting there may be a return to growth in activity levels post pandemic.

It is also worth noting that there are other demographics that have been disproportionally affected by the pandemic.

Female activity levels remained more consistently lower than 12 months earlier. This indicates that, despite their activity levels initially seeming more resilient to the pandemic, women who have seen activity levels fall may take longer and require more support to return.

The 75+ year old age group for both men and women, however, saw consistently large drops throughout the period with no real sign of recovery. This indicates the older age group may need additional support to recover activity levels, or there is a risk of the inequality widening once again.

Ethnicity: There is a clear divide whereby Black and Asian adults, as well as those in the ‘other ethnic group’, are less likely to be active than those who are White or Mixed race. The pandemics had a disproportionately negative impact on those with the lowest activity levels and as such the inequalities have widened. Among those from Asian (excluding Chinese) backgrounds, men have driven the drops. Despite this, women of Black and Asian (excluding Chinese) ethnicities remain the least active and have the largest gender gap to their male equivalents.